This article was originally published by Stateline, an initiative of The Pew Charitable Trusts, and was written by Christine Vestal.

In a rare bipartisan effort, Congress approved sprawling legislation—the Opioid Crisis Response Act of 2018—designed to make it easier for states to expand access to addiction treatment. President Donald Trump has promised to sign the bill.

The legislation, approved last month by the House and Wednesday by the Senate, also would pay for research into opioid alternatives, support greater use of non-opioid pain management and invest in new law enforcement efforts to curb illicit drugs.

Some critics say the legislation, which calls for roughly $8 billion in federal investment over five years, doesn’t go far enough given the magnitude of the drug overdose crisis. 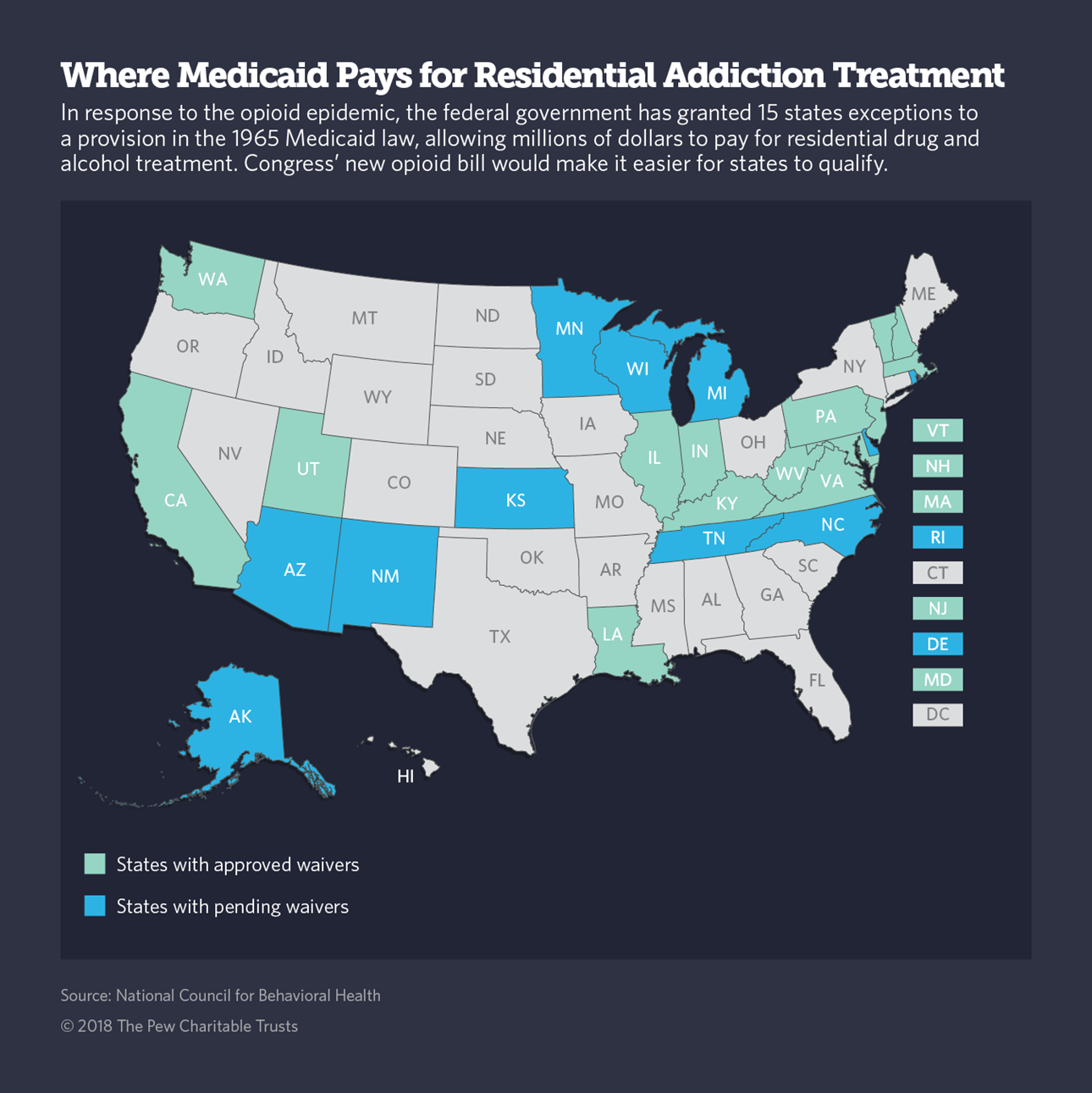 In an epidemic that killed more than 72,000 people in 2017, the federal government should commit to spending far more money on treatment, prevention and access to the life-saving drug naloxone, advocacy groups have argued. The groups, including the Harm Reduction Coalition, recommended $100 billion more in federal spending, similar to the Ryan White HIV/AIDS Program.

Still, treatment advocates say that Medicaid coverage of residential treatment and Medicare coverage of methadone would go a long way to boosting treatment quality and capacity, as well as people’s ability to pay.

The residential treatment provision would lift a 53-year-old ban in the federal Medicaid statute that prohibits coverage of mental health and addiction treatment services in facilities with more than 16 beds. Called the “institutions for mental disease” or IMD exclusion, the rule was intended to prevent states from using federal dollars to warehouse people with addiction and mental disorders.

At least 15 states have received federal waivers to the Medicaid rule, and another 11 are seeking similar waivers, under what is typically an arduous and lengthy regulatory process.

Congress’ opioid package is designed to make it easier for even more states to get similar approval.

“This provision alone will go a long way to improving both the quality of addiction treatment and its availability to low-income people,” said Matt Salo, executive director of the National Association of Medicaid Directors.

The new provision also could save Medicaid money by avoiding the unnecessary hospitalizations that have resulted when people were unable to find and pay for care.

Chuck Ingoglia, senior vice president of public policy at the National Council for Behavioral Health, which advocates for better addiction treatment, said treatment providers are thrilled with the Medicaid provision. But, he said, his organization is disappointed that the legislation did not do more to fund community-based addiction treatment.

“People with addictions are treated in residential settings for a relatively limited amount of time,” he said. “We wanted the legislation to help build community addiction capacity as well. We absolutely need both.”

In another change to longstanding federal policy, the new opioid package would for the first time allow Medicare to cover methadone, one of three medications considered the gold standard for addiction treatment.

According to Mark Parrino, president of the American Association for the Treatment of Opioid Dependence, an estimated 25,000 patients who are now receiving daily methadone treatment are 65 or older. They would benefit from Medicare coverage when the provision takes effect in January 2020.

“The provision is likely to result in even more patients seeking methadone treatment once the word spreads.” In addition, he said, Medicare coverage would allow many patients to remain in treatment rather than drop out because of an inability to pay.

Maryland has been using limited state funds to pay for methadone treatment for older people who are unable to pay. Now that Medicare will pick up the costs, he said, it leaves more funding to cover other addiction services.

He said treatment providers across the country are seeing an increase in older patients.

“The aging population is especially important to treat because of the high prevalence of other chronic conditions that result not only in avoidable suffering and death, but avoidable emergency room visits and hospital admissions,” Stoller said.

“Once seniors with opioid use problems finally get the treatment they need and deserve, Medicare and the medical system are likely to see a reduction in expenses for this high-cost population.”

NEXT STORY: The Impacts of Iowa’s Underground Needle Exchanges