One subtle lesson from the Code for America summit: Effective innovation doesn’t always require a big shift in mindset or a bold transformational idea.

OAKLAND, Calif. — One of the things I picked up at the 2015 Code for America Summit is that sometimes, you don’t always have to think outside the box.

This may seem somewhat counterintuitive at a gathering like Code for America’s big annual national convergence, where those who have challenged conventional thinking to come up with bold transformational ideas are celebrated, honored and showcased.

But yes, sometimes, you don’t have to think outside the box or break out of it. You can creatively think inside the box by simply making the box look cool or at least seem cool.

Don’t get me wrong, there are plenty of public-sector processes, structures and protocols that bog down government, especially at the local level—many of them are there for good reasons, despite their limitations. And throughout this year’s summit, there have been plenty of workshops and discussions that have shown how the power of digital innovation can change government for the better while challenging outdated models.

But there have been moments where some of the great minds that gathered at the Oakland Convention Center discussed some of the simpler solutions to achieve goals and improvements.

On Wednesday, for instance, Ashley Meyers, a former Code for America development and engagement manager who is now a civic innovation fellow with the city of San Francisco, discussed the challenges municipal governments and software and other IT vendors face with the procurement process.

There’s no simple hack to improve the procurement process, even though there are a lot of great minds in the Code for America community and elsewhere trying to improve various aspects of procurement. The procurement box, at least right now, is a formidable policy and regulatory barrier where the path to innovation is tough.

So when you can’t break out of that box, what can you do to improve it? Meyers said that the way municipal government RFPs are crafted, they aren’t all that appealing for startups and smaller vendors to go after. They’re often published in a .pdf format on “some arcane government website.” (That’s very true.)

While a municipal department or agency might still have to follow the formal rules for issuing an RFP for a Web development or tech services contract, Meyers noted that local governments might be better served promoting the RFP outside of the normal channels.

“You need a blog post that tells a compelling story,” she said. And that doesn’t require a ton of resources.

The same goes for finding great talent to lead the next generation of local government employees. Sometimes, it’s all in the framing.

Hiring is a huge challenge for governments at all levels.

And while Hillary Hartley, the deputy director of the General Services Administration's 18F told a packed convention hall on Thursday that the "pipeline into government is alive and well," there are still certainly pipes to unclog.

In the states, and in particular, in state government IT departments and technology shops, recruiting and retaining top talent is an ongoing struggle. The “silver tsunami” is approaching and personnel executives know the urgent need to hire the next generation of state government employees. (There are similar concerns at the local level as well.)

At the National Association of State Technology Directors conference in Cincinnati in August, the topic of hiring challenges was discussed, particularly attracting employees under the age of 30, who make up only 13.5 percent of state government workforces.

As I wrote at the time for Route Fifty:

And it’s that millennial age group that state government IT operations need to recruit and retain to be strong to face future challenges. That’s not an easy task. “That cultural shift is a huge challenge for state governments,” [Tom Duffy, the executive director of the Multi-State Information Sharing and Analysis Center] said.

If a state government isn’t able to streamline the hiring process, top prospects will lose interest and look elsewhere, so “make sure you can speed it up as much as you can,” said Leslie Scott, executive director of the National Association of State Personnel Executives.

[Pennsylvania Deputy Secretary for Human Resources John] Hochar laid out some recommendations for how to make the state government hiring process more attractive for millennials, which apply for IT shops, ranging from reviewing time-off policies to encourage better work-life balance to embracing tuition assistance and/or loan-forgiveness programs.

Changing things like time-off policies and offering things like tuition assistance and loan forgiveness to attract millennials are certainly good ideas, but those also require big bureaucratic shifts, much like changing procurement rules to make it easier for smaller companies and startups to bid on RFPs.

But there were a few stories at Code for America that again show that instead of monumental transformation to break out of the box, sometimes local governments simply need to look more inviting.

In the case of New York City government, the bureaucratic box needs an attractive front door.

And that’s what Ariel Kennan, the director of innovation and design in the New York City Mayor’s Office of Operations, helped build. During a talk on Thursday, she detailed how the power of design can be transformational.

When faced with the bureaucratic hoops of the hiring process when trying to attract top creative digital talent into the ranks of the New York City government, Kennan said that she “knew from the start that we needed something different. I knew it was time for a policy and process hack.”

That resulted in a special web page to better promote tech jobs available in the city government: nyc.gov/techjobs. 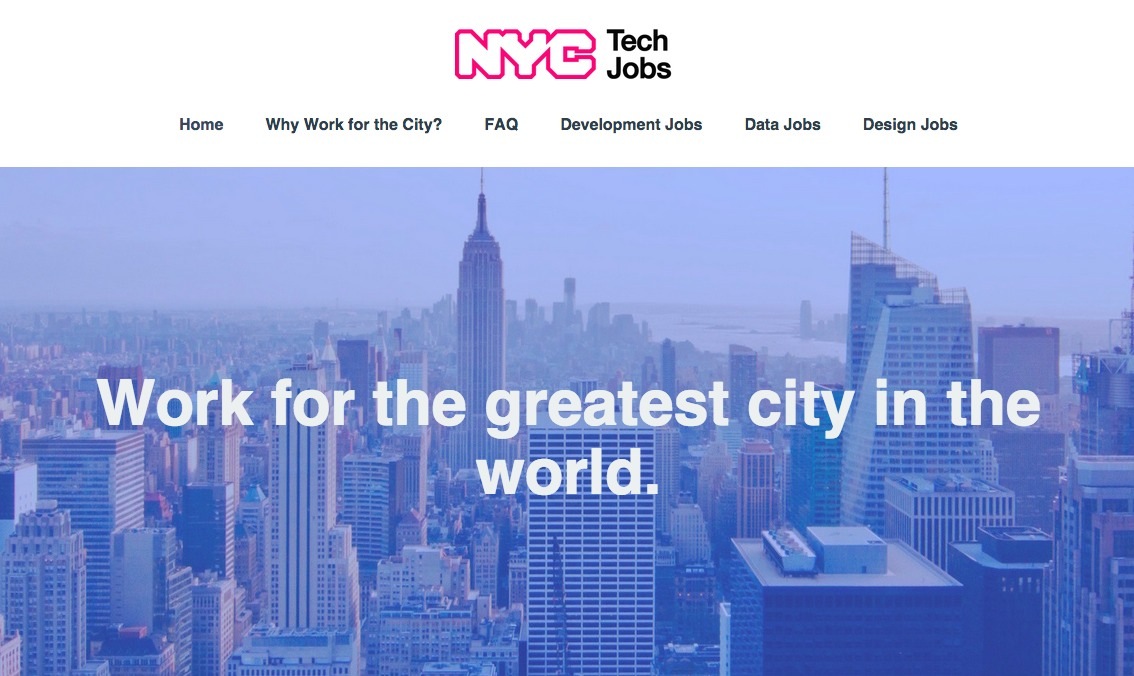 Again, a special website to better promote tech jobs in city governments is a relatively simple solution and isn’t necessarily a revolutionary, box-breaking idea. But it’s an effective one nevertheless.

And when you’re talking about problems as challenging as attracting and retaining the next generation of people that will running and improve the functionality of government contracting, it’s the low-cost, low-resource but powerful ideas that can have the biggest and more immediate impact. In many ways, those are the result of creatively thinking inside the box, not outside of it.