Can spaceports be the next economic development engine? Camden County in Georgia is betting on the industry.

This article was originally published by Stateline, an initiative of The Pew Charitable Trusts, and was written by Sophie Quinton.

Last summer, a slim red-and-black rocket blasted off from a vacant industrial site in swampy south Georgia. The rocket was 40 feet tall, about a tenth of the size of the rockets that sent the first astronauts to the moon, but it represents an increasingly important part of the space industry: rockets designed to take small satellites into orbit.

If local officials have their way, the August test flight will be the first of many launches at the Camden County facility. Local leaders are seeking federal permission to develop a commercial spaceport there, a project they hope will attract space-related jobs to the largely rural area.

“The spaceport’s the catalyst,” said County Administrator Steve Howard, who’s in charge of the project. He envisions a research park set up near the launch and landing sites, complete with services for small businesses and startups.

State and local leaders in Florida, Texas and New Mexico also have established licensed launch sites in the past decade. Adams County, Colorado, is also going through the federal application process.

But turning an old industrial site or sleepy local airport into a space industry hub is easier said than done. Industry experts question the need for new launch sites, pointing out that most existing spaceports aren’t all that busy.

“It’s a little bit of a chicken-or-egg scenario,” said Carolyn Belle, a senior analyst for Northern Sky Research, a market research firm that focuses on the space industry. Many companies are looking for a launch site but haven’t yet developed a final product to launch, she said.

Spaceports can make money contracting with companies that are still in the research phase — by renting them hangar space, for instance — but they stand to make more money once there are actual launches, she said.

Spaceport backers, meanwhile, say creating facilities now will position them for a profitable future. The commercial space industry is worth $345 billion globally, mostly driven by satellite services such as television, imaging and radio. The sector is set to grow as companies develop cheaper rockets and spacecraft for sending tourists past the edges of the atmosphere and, perhaps, eventually to Mars.

Camden County officials began to seriously consider creating a spaceport about four years ago, when Blue Origin approached Georgia’s economic development agency looking for a site suitable for launching spacecraft from a runway.

The company didn’t end up choosing Georgia, but the request, and others like it, got state and county officials thinking. In an unincorporated part of Camden County, not far from the ocean, sat an industrial site that had been a rocket-testing facility in the 1960s. 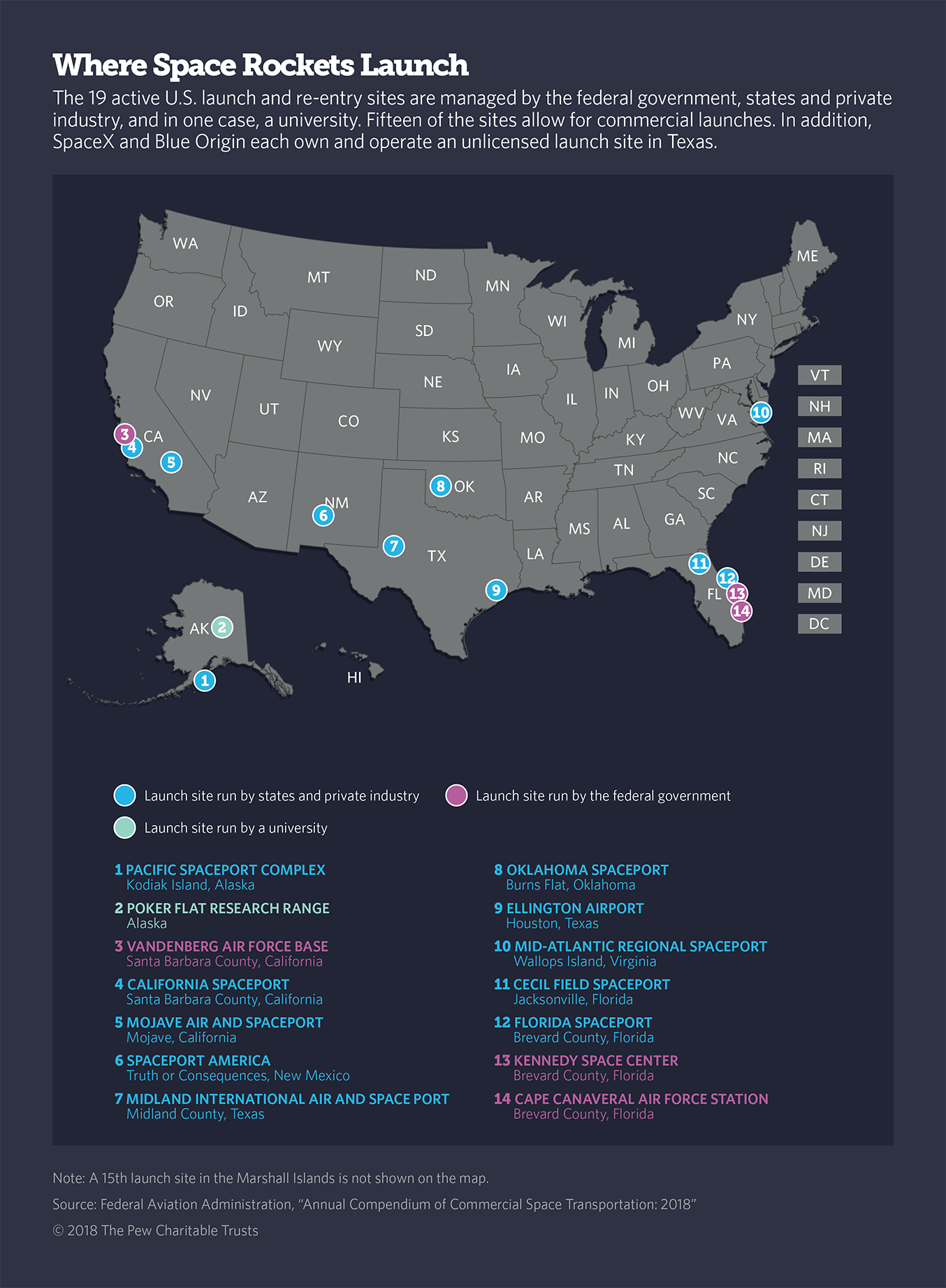 The spaceport now planned for the site would allow for up to a dozen vertical rocket launches a year, plus research and development. It could directly support over 100 jobs and add $22 million to the regional economy annually, according to an analysis from Georgia Southern University.

But getting there will take time and money.

The county is now in the final stages of a lengthy federal environmental impact assessment, a necessary step toward getting a launch operator license. Rockets that lift off from the site would shoot over beach homes and Cumberland Island National Seashore, a national park and protected wilderness area.

Some homeowners and environmentalists don’t like the idea of rockets blasting over their heads. “If a rocket explodes, we’re going to be under it,” said Kevin Lang, an attorney whose family owns a cottage on Little Cumberland Island. He says there’s a good chance environmental concerns will kill the project.

Since 2014, Camden County has spent about $4 million developing the spaceport plan, mostly on engineering and environmental consulting fees, according to the county’s annual financial reports. The money includes a $960,000 payment to Union Carbide Corp., the company that currently owns the industrial site, for the option to purchase it.

Buying the land and upgrading basic infrastructure to create a spaceport would cost additional money. Howard said the county isn’t sure of those costs yet, but noted that many modern space companies don’t need a big buildout. Vector Launch, the company that conducted last summer’s test flight under a federal waiver, brought in its own mobile mission control.

If Camden County does get its launch-operator license, the next challenge will be turning the industrial site into an economic engine.

The Cape Canaveral Spaceport Complex in Brevard County, which includes launch pads operated by NASA, the state of Florida, SpaceX and the military contractor United Launch Alliance, is popular because it’s easier to get rockets into orbit if they take off close to the equator.

Since 2015, two-thirds of the 58 commercial launches licensed by the Federal Aviation Administration have taken off from Florida. Government launches don’t require a license.

Most other commercial spaceports hosted no licensed or permitted launches last year, although the launch figure doesn’t include test flights and other aerospace research and development.

Camden County, like Cape Canaveral, has a favorable southern launch location. The county is also targeting the small satellite market, a fast-growing segment of the space industry. 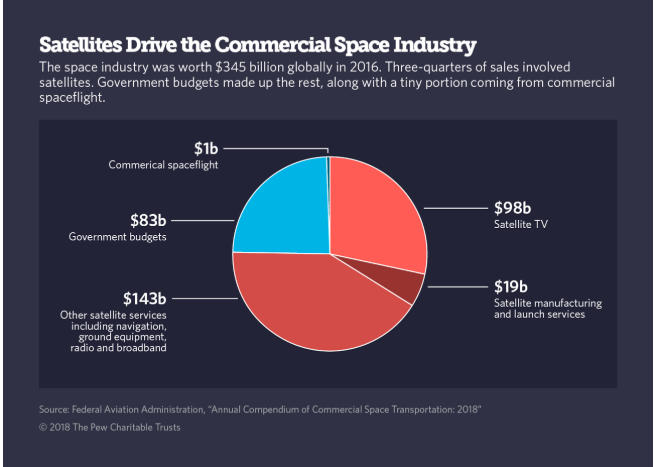 Perhaps the nation’s most controversial spaceport is New Mexico’s Spaceport America. In the mid-2000s, then-Gov. Bill Richardson, a Democrat, persuaded state legislators and local taxpayers to fund a monumental terminal and spacecraft hangar in the middle of the desert.

Virgin Galactic, a company developing spaceships that will take tourists into space, signed on as the anchor tenant. At the terminal’s dedication, in 2011, Richard Branson popped open a bottle of Champagne while rappelling down the side of the building. “We’re ticking the final boxes on the way to space,” he said at the time.

Today Virgin Galactic remains the anchor tenant at the nearly $220 million facility. But space tourists have yet to travel there. The company, delayed in part by a fatal crash, is still testing its spaceships, not in New Mexico, but at the Mojave Air and Space Port in California.

“New Mexico made the huge mistake, I think, of building for one specific, relatively untried technology,” said Paul Gessing, president of the Rio Grande Foundation, a fiscally conservative think tank based in Albuquerque. That includes building a runway extension to suit Virgin Galactic spacecraft.

“That should have been Richard Branson taking the risk, not the taxpayers of New Mexico,” he said.

Supporters say the spaceport is about more than Virgin Galactic. Last summer four other companies were leasing space at Spaceport America, although two of them had yet to fly missions from the spaceport.

Virgin Galactic maintains an office in nearby Las Cruces that’s reportedly adding employees as the company gets closer to its first launch with paying passengers. Virgin Galactic could not be reached for comment.

State and local funding comprised about three-quarters of the spaceport’s revenue in 2016, according to the New Mexico Spaceport Authority. But lawmakers aren’t giving up on the project. This year, they approved $10 million for a new hangar. The money is contingent on the spaceport getting a new tenant.

“The space industry is growing exponentially, and I want New Mexico to be a part of it,” said state Rep. Rebecca Dow, a Republican whose district includes Spaceport America.