This story was originally published by Stateline, an initiative of The Pew Charitable Trusts.

Fewer people are living in Pittsburgh—95,000 fewer than in 2000. But the remaining residents are growing wealthier even as the Steel City shrinks: Income per capita is up 24 percent during the same period.

Even Huntington, West Virginia, hit hard by the opioid epidemic and the decline of coal mining, has experienced a growing income per capita despite a shrinking population.

Some of these metro areas have high-paying jobs in energy, health care or education. Others have managed to reshape their manufacturing legacies for a new economy. All of them are evidence that despite conventional wisdom, cities don’t necessarily need population growth and more jobs to be economically healthy. 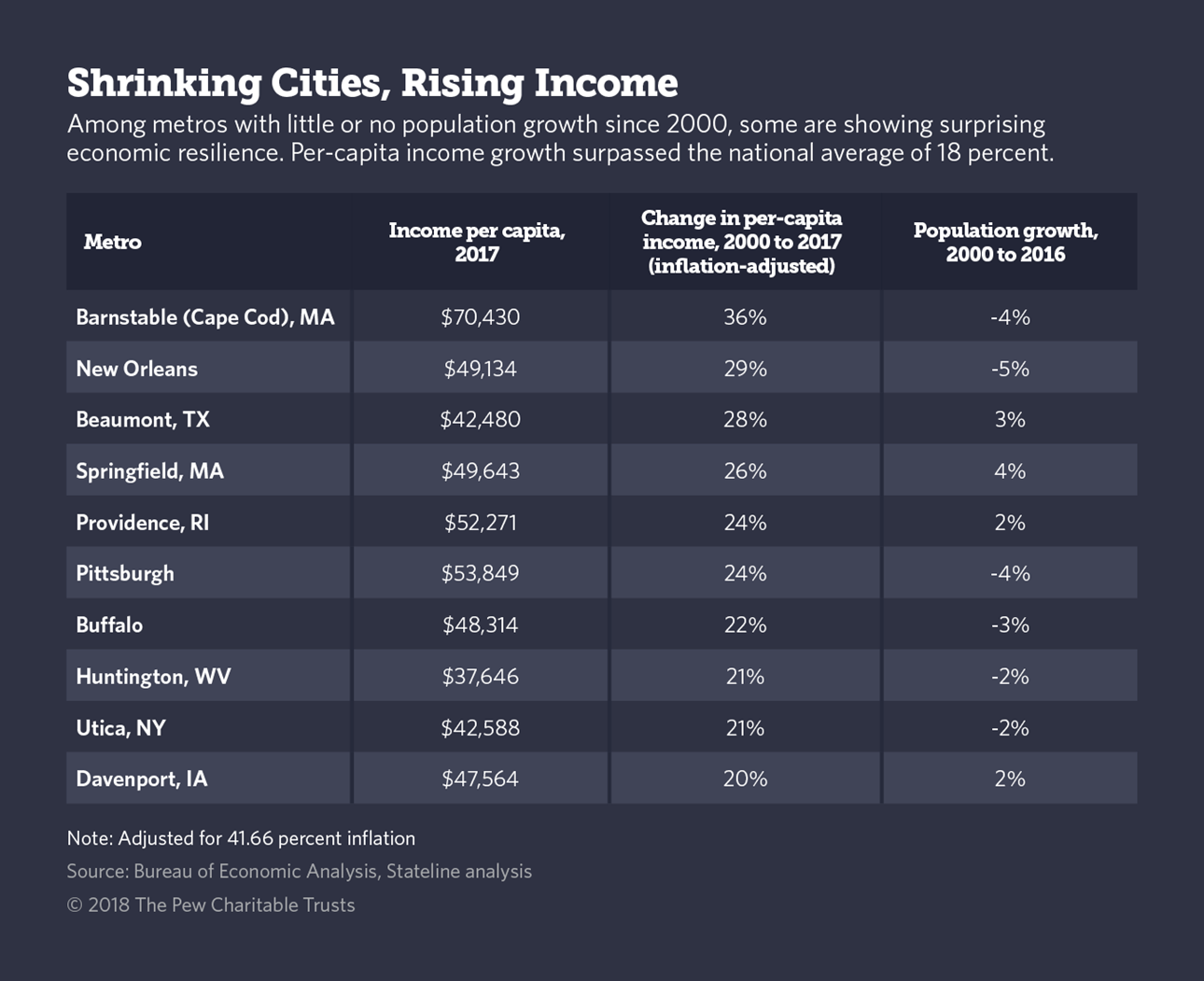 In fact, fast job growth can be unhealthy, if most of the new positions are low-wage jobs that don’t increase income per capita. In contrast, higher-paying jobs have a multiplier effect because they create demand for additional services.

“The story in Pittsburgh is very positive, and other metro areas are looking to it as an example of the transformation that might be possible,” said Guhan Venkatu, who wrote an economic history of the area called “Rust and Renewal” for the Federal Reserve Bank of Cleveland.

Sterling academic institutions, such as Carnegie Mellon University and the University of Pittsburgh, have helped bring tech jobs and innovation to the area by sponsoring tech incubators that help graduates start companies without moving to Silicon Valley or San Francisco.

The strategy has helped keep Pittsburgh’s educated young population growing even as overall population in the city and region has dropped.

Pittsburgh has more STEM (science, technology, engineering and math) jobs than other shrinking cities, about 80,000 or 7 percent of all jobs. Providence, Buffalo and Davenport, Iowa, are right behind at about 5 percent, according to a Stateline analysis of federal job statistics using census definitions for STEM jobs.

STEM jobs, along with those in business, management, the arts and media, tend to add productivity and income growth to a metro region, according to Richard Florida, an urban studies theorist at the University of Toronto and former head of an economic development center at Carnegie Mellon.

Incomes in Pittsburgh have been higher than the national average since 2010, after falling below the average in 2000. Yet its population has declined steadily since 1970, a period during which it has been surpassed by Miami, Dallas, Portland, San Antonio and 14 other cities.

Manufacturers of high-tech medical devices in the Pittsburgh area have doubled employment in the last 10 years. Jobs in scientific research and computer systems design also have played prominent roles in the region’s success.

The final piece of the puzzle came in the mid-2000s, when fracking in the Marcellus Shale, much of it near Pittsburgh, made Pennsylvania a top producer of U.S. natural gas.

Blue-collar jobs in natural gas plants pay an average of $65,000, according to 2017 federal pay statistics. Similar jobs at similar wages can be found in Huntington, New Orleans, Beaumont and Springfield.

“What makes places different is, do they still have manufacturing? Do they still have [energy] extraction?” said Anthony Carnevale, director of the Georgetown Center on Education and the Workforce. “Those are the things that tend to hold up over time.”

‘Not a Good Thing’

But some experts question whether growing income per capita can really make up for a stagnant or declining population.

“A city with slow population growth and fast income growth might be considered healthy, if only because there are more resources to go around,” said Patrick Adler, a Ph.D. candidate at UCLA and researcher at the University of Toronto. But population loss does matter, Adler said, if it means lower-skilled workers have fled because of a lack of opportunity.

In Huntington, well-educated health specialists such as nurse anesthetists earn an average of $174,000 a year. They are in high demand at Huntington hospitals that serve outlying rural areas, said Roger Cruse, president of the West Virginia Association of Nurse Anesthetists.

“We make pretty good money,” Cruse said. “We don’t struggle economically, and I think that’s inspiring some local young people to look at the profession and maybe even outside people to think about moving here.”

But high-paying jobs in education and health care can disappear if the population declines too dramatically.

“If you go through small towns, you’ll always see that the one with the hospital has some good jobs,” Carnevale said. “But if the population is too elderly and rural—that’s just one generation burying the last. It’s not sustainable. There’s going to be some consolidation of health care, I think, into more urban areas.”

And in some places, there are specific reasons for the disconnect between population growth and income per capita.

In New Orleans, where the population has declined by 4 percent since 2000, the devastation from Hurricane Katrina in 2005 is still visible from downtown, where views to the east show the scars of neighborhoods bulldozed after the storm. Many of the residents who were displaced and never returned were low-income, part of the reason income per capita is up 24 percent since 2000.

However, the New Orleans area also has benefited from relatively high-wage jobs in petrochemical plants, which have sprung up along the Mississippi River north of the city, said Loren Scott, a professor emeritus at LSU and economic consultant. Plant workers make about $71,000 on average, and with more training can make as much as $100,000 a year, Scott said.

Natural gas products are still far cheaper to make in the United States than in Europe or Asia, helping to bring more high-wage jobs to the Gulf Coast where export by ship is easiest, Scott said.

Over the long term, however, maintaining prosperity in the face of population loss may be difficult.

John Deskins, director of the state Bureau of Business and Economic Research at West Virginia University, said that despite “bright spots” at regional hospitals and power plants, Huntington needs to do a better job of keeping its young people, who are leaving the area for better opportunities elsewhere. Their departure inflates income per capita but is a troubling sign for long-term prosperity.

The Huntington area is likely to see more population loss in the coming years because of aging and poor health related to coal mining and opioid abuse. As a result, much of the income growth will come from raises in Social Security, disability insurance and other government payments, according to projections published by Deskins’ office.

Even Pittsburgh would be wise to find ways to increase its population, Venkatu said.

“If you continue to lose employees or population, it’s also a measure of your attractiveness and your likelihood of finding success over the long term.”