But the state capitol landscape for reporters varies greatly nationwide.

Two-thirds of American newspapers do not have reporters covering their statehouses, either full- or part-time. One in seven statehouse reporters is a student. And if you compare the respective state capitol press corps in Minnesota and Colorado, states with roughly equal populations, there are three times more full-time statehouse reporters in St. Paul than there are in Denver.

These are some of the findings of a new Pew Research Center study of reporter ranks across the 50 state capitals. It found that there are nearly1,600 journalists covering state government, with roughly half of those on full-time statehouse assignments.

Just as newsrooms across the nation have endured great ownership convulsions, contractions and consolidations over the past decade because of shifting media economics, the overall ranks of reporters covering state capitols has declined, too.

But Pew’s report, which aimed to do a full accounting of reporters assigned to cover state capitols either on a full-time basis, part-time or only during a legislative session, is not entirely doom and gloom. 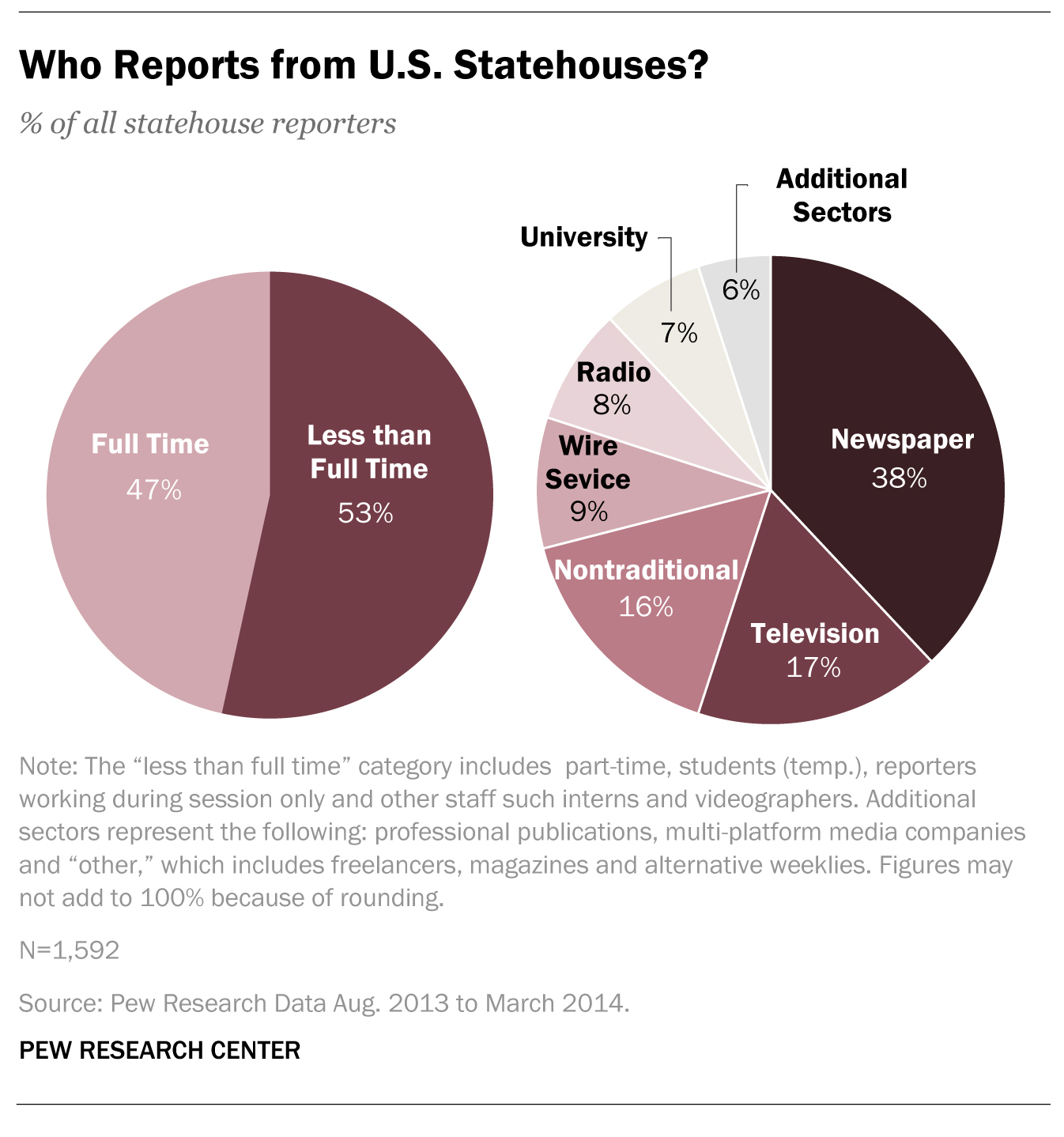 Newspapers, which have traditionally sent the largest numbers of reporters to cover state capitals, have continued to cut back on statehouse coverage, a 35-percent reduction since 2003. Newspapers still make up the largest percentage of statehouse reporters, 38 percent, and comprise 43 percent of full-time reporters. 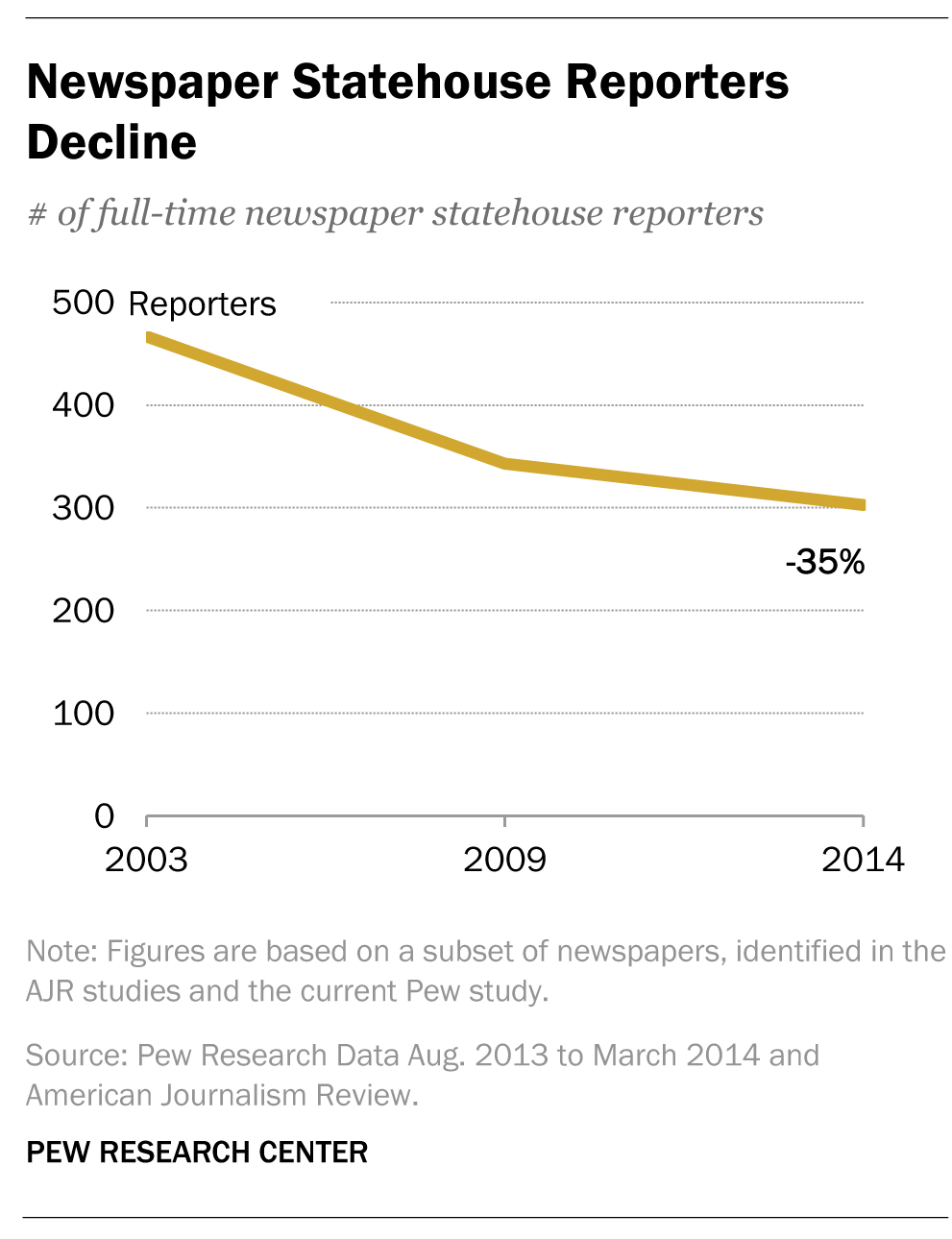 As newspapers have declined, non-traditional news outlets, including non-profit, ideologically oriented and digital for-profit startups, have become a more pronounced presence, accounting for one in six statehouse journalists.

“Non-traditional outlets are becoming more a part of the scene,” Amy Mitchell , director of journalism research at the Pew Research Center, told GovExec State & Local . It’s just that they haven’t made up for the overall reporting losses experienced in state capitols.

Most of the non-traditional news outlets covering statehouses that Pew classified as ideological in nature are either conservative or promote free market economics.

That includes reporters from the non-profit Franklin Center for Government & Public Integrity , which deploys reporters to full-time assignments covering state legislatures when they are in session, 16 state capitols in all.

Only one of the ideological news outlets Pew identified, NC Policy Watch , described itself as being progressive, according to the report.

But have those losses eased and are statehouse reporting ranks going to stabilize?

“The data doesn’t say that one way or another,” Mitchell said. But when Pew interviewed journalists and state government stakeholders to gather insights on the strength of journalism happening in statehouses, “there’s a strong sense of loss,” she said. “Many people referred to a loss happening over a decade.”

But the continued losses since 2009 don’t seem to be as severe as they were in the mid-2000s, Mitchell said.

In other bright spot for statehouse reporting, The Associated Press wire service has bolstered coverage of state governments and legislatures after cutting back during the recession.

Mitchell’s research group found about 220 students covering state capitols nationwide, making one of seven statehouse reporter nationwide a student. “They are contributing a great amount to statehouse coverage around the country,” she said.

There are also a few media collaborations, including, most notably, the jointly-run Tallahassee reporting unit from the Miami Herald and Tampa Bay Times .

“There are potential gains and losses in these collaborations,” Mitchell said. “You can pool talent to potentially reach new audience but the downside is the potential drop in the number of voices asking questions.” Overall, there’s a concern, Mitchell said, that with fewer reporters to ask questions, that there’s been a change in how legislators behave.

Fewer and fewer local television stations that have newsgathering operations assign reporters to their state capitols.

State capitols in larger population states — California, Florida, New York and Texas — tend to have a larger statehouse press corps. In Austin, the Texas Tribune maintains the largest statehouse press presence anywhere in the country, with 15 full-time reporters assigned to cover state government and the legislature.

Digital upstart Capital New York , purchased by the owner of Politico , now has the largest statehouse reporter presence of any outlet in Albany, including The New York Times and the Times Union .

NEXT STORY: Seattle Seeks to Save Its Bus System