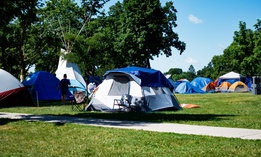 COMMENTARY | State and local governments that cut public spending after the Great Recession fared worse than those that increased spending. Let’s not make the same mistake again.

State and local governments are on the verge of economic catastrophe. Increased spending to combat the Covid-19 pandemic, combined with declining revenue and little federal relief, has states and localities fearing the worst about their economic outlook.

Much like previous economic disruptions, the go-to government response to fiscal peril appears to be cuts to spending and public services. Take Connecticut Gov. Ned Lamont, who, despite a record-setting $2.8 billion rainy day fund, is refusing to access it or raise taxes. Instead, he’s insisting on cutting public services during the worst public health crisis in over a century.

The Great Recession provides important lessons about spending cuts. A 2012 Center for American Progress study found that states that cut spending fared worse economically than those that increased spending. In the wake of that financial crisis, almost a quarter of the local public health workforce was let go, funding for K-12 education remained well below 2008 levels in many states and the labor market took more than six years to recover its earlier employment levels.

Connecticut, along with Alabama, New Mexico and other expenditure-cutting states, suffered higher unemployment, lost private sector jobs at a higher rate and experienced slower economic growth. In North Carolina, cuts to unemployment insurance, education, legal aid and other public goods helped shrink the middle class. A report found that North Carolina had seen a 21% increase in workers at the poverty level since 2009. During the five years after the last crisis in Connecticut, the incomes of the top 1% grew 17%, while the incomes of everyone else dropped about 2%. As economist Adam Hersh, the Center for American Progress study’s author, concluded, “Dramatically cutting spending in a fragile economy ... can pull the rug out of from nascent economic growth.”

With Washington deadlocked over stimulus funding, state and local leaders must walk and chew gum at the same time. While they must continue to demand federal relief to save lives and lay the foundation for full economic recovery, they shouldn’t use the current economic climate as an excuse to slash spending. Instead, the lessons from the Great Recession confirm the need to increase—not decrease—state and local spending.

States and municipalities are facing even higher budgetary pressure now than during the last recession. During the peak year, states experienced a collective shortfall of more than $220 billion. Now, one estimate has them facing a gap of at least $555 billion through the 2022 fiscal year. The economist Joseph Stiglitz estimates that cuts to state and local spending could lead to 5.5 million additional jobs lost nationally and induce a contraction of between $240 billion and $450 billion in GDP. This would undoubtedly harm the national economy.

Say 'No' to Privatization

“Desperate government is our best customer,” the chairman of a financial firm specializing in infrastructure privatization proclaimed during the Great Recession. “There will be a lot of desperate governments out there.”

Unfortunately, he was right. Corporations and private investors pitched privatization to state and local governments with astonishing success from 2008 onward. School districts, municipal water departments and public universities from coast to coast recklessly outsourced employees. Chicago sold off its downtown parking meters for nearly $1 billion under value. Arizona sold its legislative and court buildings only to rent them back.

This flew in the face of decades of evidence that privatization rarely saves public dollars, all the while reducing transparency, limiting flexibility when it comes to policy-making, lowering service quality and increasing economic and racial inequality.

State and local leaders must avoid falling into the downward spiral of austerity and privatization. Not only will it hurt the local economy, but it could also undermine policymaking for decades to come. For example, Chicago’s parking meter contract contains clauses that give away the city’s rights to manage traffic and land use near the meters until 2083. That’s on top of the city losing nearly $1 billion on the deal.

Some states and localities have recognized that privatization is a fool’s errand and as a result, insourced—or “re-municipalized” services. In 2015, New York City began ending expensive contracts for IT services and bringing the work back in-house. By 2018, this was saving the city over $9.3 million annually. Two years ago, Fort Wayne, Indiana, took over the management of its snowplow trucks, police cars, and other vehicles to improve reliability and save an expected $350,000 a year.

What Then Must We Do?

The path forward is difficult but crystal clear. State and local leaders must continue to demand federal relief—which is essential—while also doing their best to generate needed revenue. How? By raising taxes on those who can afford it. As the Institute on Taxation and Economic Policy (ITEP) wrote in an April report, “Even with more federal support, states will need home-grown revenue solutions in the short, medium and long terms as the crisis and its fiscal fallout intensify, subside, and eventually give way to a new normal.”

State and local leaders should increase taxes on households, businesses and sectors of the economy that have continued to do well during the crisis. Options include raising rates on upper-income brackets, eliminating poorly targeted subsidies, implementing “excess” profits taxes, repealing corporate tax giveaways and many others.

The lesson from the Great Recession is that increasing public spending—by raising more revenue—is the best way to help a sputtering economy recover.

This may sound idealistic, especially during a pandemic. But in May, Portland-area voters paved the way by approving a 1% income tax on high-income earners and large businesses that will fund homeless services. In June, Colorado lawmakers axed tax breaks for businesses and wealthy individuals to raise an estimated $156 million over three years for public education. In July, the Seattle City Council passed a new progressive tax on large corporations that will raise more than $200 million a year for housing, local business assistance and community development. And, more recently, New Jersey Gov. Phil Murphy announced a deal has been struck on a new “millionaires tax” on those earning more than $1 million a year.

Democrats in New York’s state legislature have introduced a tax on billionaires that would raise $5.5 billion a year. In California, San Francisco is considering a “CEO tax” and a recently introduced statewide bill would levy a small tax on every resident worth more than $30 million.

These are far less than what’s needed, and the idea of all 50 states and the thousands of counties and municipalities following suit is hard to imagine. But Americans generally favor taxing the rich. For over a quarter of a century, polling has shown that a majority believes that upper-income earners pay too little in taxes. And it’s true—in 2018, U.S. billionaires paid a lower tax rate than teachers, construction workers and other working people for the first time in history.

In fact, raising taxes on the wealthy would simply be making the tax system fairer. According to a 2018 ITEP report, on average, the lowest-income 20% of taxpayers nationwide face a state and local tax rate more than 50% higher than the top 1% of households.

Someone should tell that to Gov. Lamont in Connecticut. And Florida Gov. Ron DeSantis, who is calling on state agencies to cut 8.5% of their current budgets. And the Oregon legislature, which recently cut nearly $400 million from the state budget, mostly to human services. They’re shrinking during the most critical moment of state and local governance, when the time calls for bold, innovative leadership.

Jeremy Mohler is communications director of In the Public Interest, a nonprofit think tank that studies public goods and services and advocates for government that works for all of us.

NEXT STORY: Six Months Into the Pandemic, Out-of-Work Texans Are Still Struggling to Navigate Unemployment System