This article was originally published by Stateline, an initiative of The Pew Charitable Trusts.

Fracking requires a huge amount of water, a major concern in dry Western states that otherwise welcome the practice. But New Mexico thinks it can mitigate that problem by pushing oil companies to treat and recycle fracking waste water for use in agriculture—or even as drinking water.

State officials, with the help of the U.S. Environmental Protection Agency, are still working out the details. If they move forward with the strategy, other arid states may follow New Mexico’s lead.

“Oil and gas in New Mexico provide over a third of our general fund,” said Ken McQueen, who heads the New Mexico Department of Energy, Minerals and Natural Resources. “We have to be concerned we’re doing what’s necessary into the future to make sure this industry continues to be alive and vibrant.”

In addition to keeping a vital industry going, McQueen thinks the reclaimed waste water could be a boon to New Mexico farmers and ranchers who need water for their crops and herds. Factories could use it, and it might help revive parched wildlife habitat, he said. And even though the waste water is filled with salt and other minerals, it might even be treated and used for drinking.

In a typical month, the amount of waste water generated by the fracking process in New Mexico, the country’s third-largest producer of oil, would be enough to fill Elephant Butte, the state’s largest lake.

“Our hope is that it has a significant impact,” McQueen said, eyeing figures that might total a billion barrels of water a year. “As we see the produced water volumes increase, it just makes sense that we explore other methods of disposal, particularly if those methods may have an upside or beneficial use to New Mexico.”

But even in the nation’s fifth-driest state, where water is as precious as crude, environmentalists are skeptical of a strategy many state leaders view as a greener approach to dealing with waste water. Even after it is treated, they argue, the water can be tainted by harmful metals or chemicals used in fracking, creating long-term risks for people and the environment.

“If they go without challenge, these plans will forever change New Mexico’s water,” the Red Nation, a Native American advocacy group, said in a statement released in advance of a protest at a recent oil and gas industry conference in New Mexico. The new regulations would “guzzle up the region’s scarce and sacred freshwater resources for fracking and then ‘re-introduce’ dirty water back into the hydrological cycle.”

During hydraulic fracturing, or fracking, oil companies inject fluid — a mixture of water and chemicals, plus sand—deep underground into rock formations to release oil and natural gas. For every barrel of oil fracking produces in New Mexico, it yields up to five barrels of “produced water”—a combination of the excess fracking water and water released from the rock.

Sometimes oil companies reuse the waste water to bring up more oil, but in many cases they dispose of it by pumping it deep underground using wells called injection wells.

Injecting the waste water has created serious problems in states such as Oklahoma and Kansas. Both states have passed restrictions on injecting the water after scientists concluded that the practice has caused earthquakes, sometimes several in a single day.

With the help of the EPA, New Mexico officials earlier this month released a draft document on how to clarify state and federal regulations to promote reuse of the waste water.

The EPA also is conducting a separate study to potentially find other uses for produced water, citing the limitations of injection and requests from dry states asking “what steps would be necessary to treat and renew it for other purposes.” 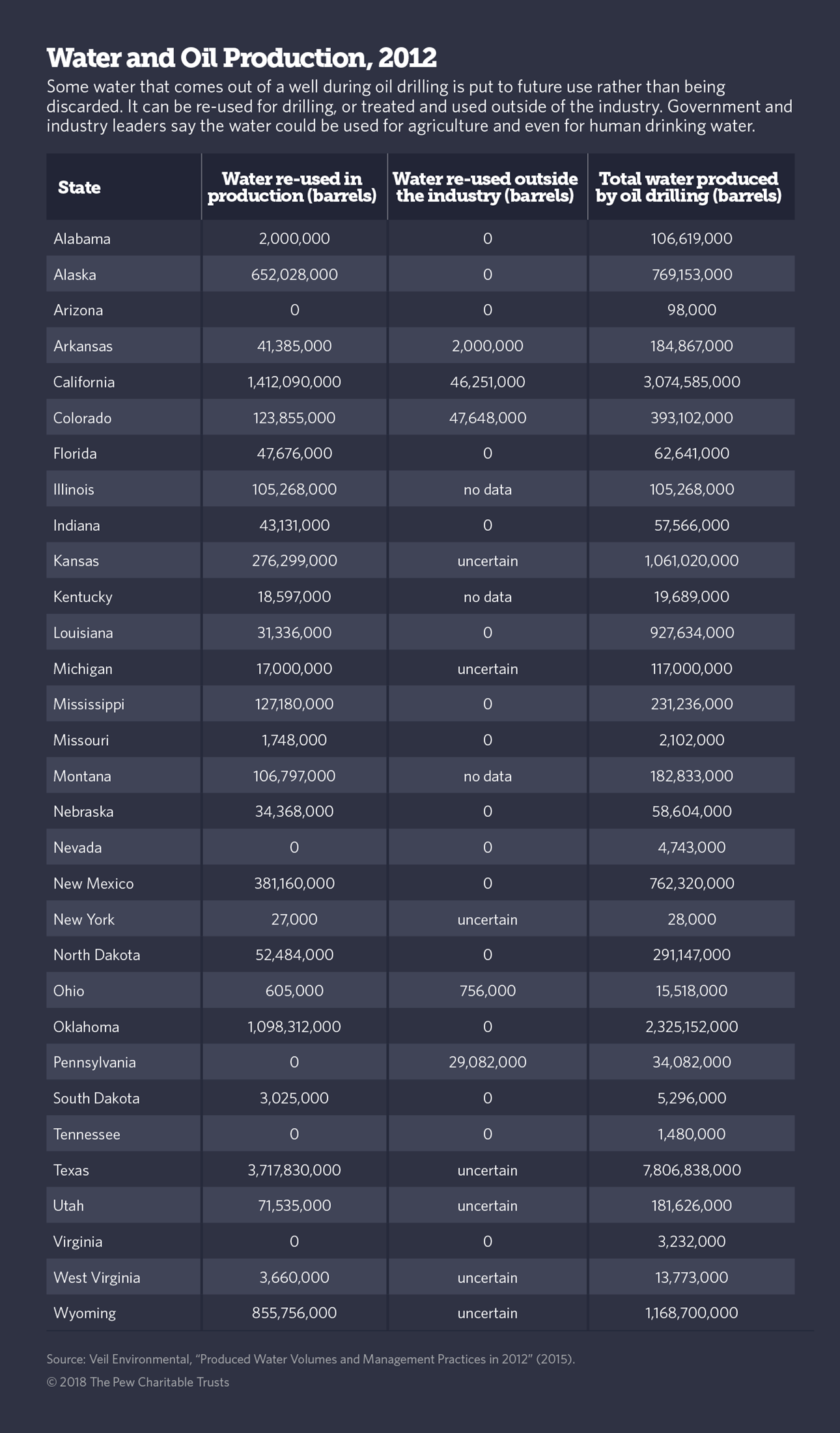 Bob Poole of the Western States Petroleum Association said energy companies may opt for treatment and reuse instead of injection, but only if “it works economically for the company.” If there happens to be an environmental benefit, he said, “that is a win-win.”

In Pennsylvania, for example, a complex permitting process makes it difficult for companies to inject produced water within the state. Some of the water is trucked to Ohio and West Virginia for injection there, and some of it ends up with companies such as Eureka Solutions, based in Williamsport, Pennsylvania, which removes the salt so it can be used for deicing roads and cleaning swimming pools. Eureka dumps the treated leftover water into the Susquehanna River.

Eureka charges about $8 a barrel, which is comparable to the cost of trucking it elsewhere.

But in New Mexico, where it costs as little as a dollar a barrel to inject produced water, treating it would have to be cheaper to make it worthwhile.

“We’d love to get it cheaper and that would really incent producers to move in our direction,” said Kevin Thimmesch, Eureka’s chief operations officer. “But I think we’ll need economic incentives with states to get us to that level.”

Aubrey Dunn, New Mexico’s outgoing land commissioner, said the state isn’t doing enough to incentivize treatment instead of injection. He supports state tax breaks for companies that treat the waste water so it can be used for agriculture or drinking.

“It can get that clean, but it takes money to do it,” Dunn said, estimating that treatment costs in New Mexico would be closer to $4 a barrel. “That will encourage people to do it versus dumping it.”

But even if the water can be treated in a way that’s economically viable, environmentalists question whether it should be used at all.

Eleanor Bravo, head of Food and Water Watch in New Mexico, which is a member of the Environmental Alliance of New Mexico, said many of the state’s environmental groups plan to fight any use of the water.

“We oppose even entertaining the idea of using this on crops,” she said. “Because it’s chemically altered we believe it can never be returned to the evolutionally process as water.”

A 2015 study lead by a Duke University professor found that even treated waste water from the oil and gas industry had up to 50 times the amount of ammonium allowed by the EPA.

Colin Leyden of the Environmental Defense Fund said governments and the oil industry should proceed cautiously, citing “scientific gaps” on the long-term effects that using the water could have on human and environmental health.

“We don’t know a lot about produced water because frankly it’s always gone down a hole, it’s always gone down the well,” Leyden said. “If you’re dumping it in the Susquehanna [River] and diluting it 1,000 to one, or putting it on a lettuce crop, or if it’s for municipal use for potable water, those are very different things.”

McQueen acknowledged that even he isn’t certain that New Mexico’s produced water can be made clean enough for drinking water or even agriculture.

“Where it eventually ends up will depend on our confidence that we can test it and make sure it’s safe,” he said. But he said critics “should look at where a lot of their other water is being sourced from these days. Technology has evolved to where water from sewage treatment plants is being recycled and reutilized for drinking water.”

NEXT STORY: Verizon Extending Fiber Network to Every Boston Neighborhood