States Are Getting Close to Spending Down Federal Covid Aid

In One State, a Battle Over Publicly Naming Disciplined Police Officers
sponsor content

States Are Getting Close to Spending Down Federal Covid Aid

In One State, a Battle Over Publicly Naming Disciplined Police Officers
sponsor content

The cost of your highway tolls depends on if you bought your electronic pass in-state or out.

This article was originally published in Stateline, an initiative of the Pew Charitable Trusts.

Zipping along the Massachusetts Turnpike, unsuspecting tourists from other states encounter an electronic toll plaza. No problem: The transponder they bought in their home state registers the toll and deducts the amount from the account.

But what most travelers don’t know is that the charge is almost $2 more than if they had purchased the device in Massachusetts.

Some 50 million Americans are expected to hit the roads this year, mostly during the summer tourism season.

The number of toll roads is increasing, and in many states, drivers who bought their transponders elsewhere get charged what’s called the cash rate, a higher amount they’d pay if they had to queue up and hand over bills and coins. Most of the time, drivers don’t even know it — raising questions about government transparency.

“Take that, neighbors!” scoffed Robert Sinclair, spokesman for the AAA Northeast, which counts millions of drivers among its customers. “Welcome! Cash rate for you, buddy!” AAA officers wrote to E-ZPass officials to express dismay back in 2012, but no changes were made.

In response to a query from Stateline, E-ZPass Executive Director P.J. Wilkins said his organization has nothing to do with setting toll rates — that’s up to individual states.

“Each state provides a discount, or doesn’t provide a discount,” he said in a phone interview. “They set their own rules. We’re not in that part of their business. The area where those discounts occur for their own E-ZPasses is mainly in the Northeast.”

Sinclair said the rationale for the two-tiered systems is to make money from out-of-state drivers who may travel the road infrequently, don’t have time or patience to buy a transponder from the state through which they are travelling, or are simply unaware.

In Connecticut, a proposal from Gov. Ned Lamont, a Democrat, to institute all-electronic tolling like most New England states is headed for a special legislative session, according tothe Hartford Courant.

Lower prices for in-state transponders are “an incentive to buy a transponder in a certain state,” said David Elder, transportation planner at the Connecticut Department of Transportation. It’s also a “way to make tolling more palatable for elected officials. They can say residents and commuters aren’t going to pay as much as someone from out of state using our facility.” 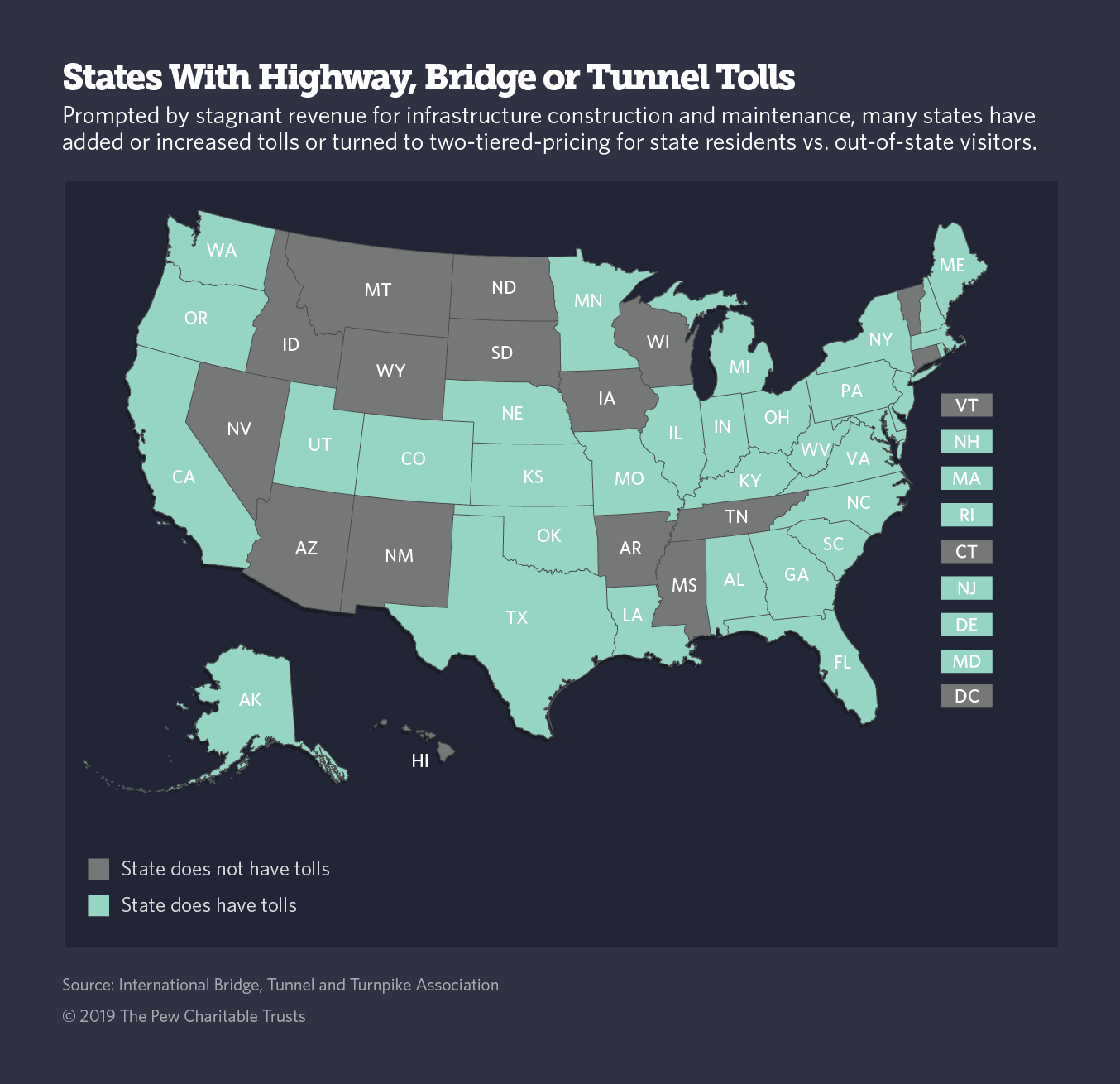 States have long had one rate for cash and a lower one for electronic charges registered by a transponder, a small plastic device stuck to the windshield that registers tolls. An E-ZPass is just one type, and it is used by 17 states, mostly in the Northeast.

But with the burgeoning number of “E-ZPass Only” roads or exits, some states came up with a new way to set different toll amounts — by transponder origin. While there are sometimes signs on the toll roads listing the different tolls, the messages are generally small and hard to decipher at 65 mph.

For example, going from the western-most end of the Mass Pike to the Interstate 495 interchange toward northern New England using a Massachusetts transponder costs $3.50, but with a transponder purchased elsewhere, it’s $4.05.

“One of the issues with it, is that there is limited transparency,” said Mary Connaughton, director of government transparency at Pioneer Institute, a free market public policy research group in Boston.

“Someone coming into Massachusetts doesn’t realize they will pay a higher toll if they have an E-ZPass from another state,” she said.

The states with the different toll levels say the solution for travelers is easy — just buy one of their state’s transponders and use it while in their state. E-ZPass costs vary among states, but the device usually costs less than $20. Some states add monthly maintenance fees.

But that’s a clunky solution, Connaughton said in a telephone interview.

“That is really inconvenient for folks,” she said. “When you are going from state to state, you are not going to reach up to your windshield and take out another tag and place the other one in aluminum foil so you don’t get charged twice.”

It’s particularly inconvenient when states are close together, such as in New England, for example, or when commuters are going from New Jersey to New York.

AAA ran a comparison of the in-state and out-of-state tolls that showed significant differences in pricing.

In an informal 2017 survey of two-tiered toll rates, the AAA foundthat drivers with a transponder issued out of state were charged the cash rate — $8.50 for major New York City bridges and tunnels at the time — rather than the E-ZPass rate, $5.76.

At the Verrazano Narrows Bridge, the E-ZPass rate for drivers from out of town was $17, compared with $11.52 for drivers with an in-state pass.

Overall, the Metropolitan Transit Authority from 2012 to 2016 charged the cash rate to more than 92 million E-ZPass drivers from out of town, the survey found. The greatest number, 70 million, were from neighboring New Jersey.

The next-highest total of MTA E-ZPass out-of-state users came from the Massachusetts Turnpike Authority at 7.7 million followed by those using a Pennsylvania Turnpike Commission transponder at 5.2 million.

While the tolls may have increased since the survey was taken, AAA’s Sinclair said that the disparities remain.

According to AAA, at least eight northeastern states — Maine, Maryland, Massachusetts, New Hampshire, New Jersey, New York, Rhode Island and West Virginia — have a two-tiered system at least some of the time, for example during rush hour. Delaware, North Carolina, Pennsylvania and Virginia do not.

Local tolling agencies also have signed on to discounts for residents.

Drivers who take the Scudder Falls Bridge from the Trenton, New Jersey, area into Pennsylvania will be charged a toll beginning around July 10, the Delaware River Joint Toll Bridge Commission announced. E-ZPass is accepted, and drivers who go into Pennsylvania frequently and get the New Jersey version of the pass will get a 40% discount, the agency said.

Elsewhere in the country, some states are moving away from the two-tiered charging system.

Texas, Kansas and Oklahoma, for example, all use the same kind of transponder for electronic tolling. “We have an interoperability agreement,” said Rachel Bell, director of business services and customer relations at the Kansas Turnpike Authority. “If you have a transponder from one of those states, you will be charged the same electronic rate” as our in-state customers.

The Orlando area has an “E-Pass, not to be confused with an E-ZPass,” said Brian Hutchings, senior communications specialist for the Central Florida Expressway Authority. The E-Pass works only on roads operated by the authority.

If Floridians want to travel on other states’ E-ZPass highways, you have to get an “E-Pass Extra,” he said. E-ZPass holders from other states can use that on the Central Florida roads.

“You have a lot of snowbirds that come down here, and they had to have two transponders,” he said. “Now you can have the convenience of multi-state toll paying with one transponder.” Discounts are available for Florida roads with the E-Pass Extra.

However, neither of those two transponders works on the Florida Turnpike. For that, you have to have a “SunPass,” he said.

Toll roads are becoming increasingly popular, partly because states are reluctant to raise the gasoline tax, the main funding mechanism for road repair and infrastructure building and maintenance at both the federal and state level.

A report by the International Bridge, Tunnel and Turnpike Association showed the number of trips taken by drivers on toll roads increased 14%, from 5 billion trips in 2011 to 5.7 billion in 2015, the last time the association took a survey. The association also noted a 20% increase in electronic tolling during that time.

The Federal Highway Administration, in a separate report, found a 9% increase in overall toll road mileage within the United States, from 5,400 miles in 2011 to 5,900 miles as of 2013.

Toll roads themselves are controversial. Critics note that tolls go up consistently and say they are inefficient, citing a 2016 Congressional Research Service report that said that every highway toll dollar costs between 8 and 11 cents to collect, even with electronic tolling, which is more efficient than cash. Collecting the gas tax costs about a penny of every dollar it brings in.

But with infrastructure funding bills stalled in Congress, states are coping as best they can.

Maryland Gov. Larry Hogan, a Republican, this month won approval from the state’s board of public works to open bidding by private companies to build and operate toll lanes on the Capital Beltway and an adjoining interstate as part of a plan to relieve growing congestion on suburban Washington, D.C., roads. Under the public-private partnership, the private companies would reap most of the toll revenue.

Renu Zaretsky, a writer for the Tax Policy Center who wrote a column on the differences in toll pass charges, said her family lives in Michigan but bought an E-ZPass in Ohio for a vacation along the Eastern Seaboard.

“It’s a game you can play, if you are a resident or a nonresident,” she said in a phone interview. “It’s such a small amount of difference, however, I wonder if people don’t notice it unless they are heavy, heavy drivers.”

“It might be fairer if everybody was charged the same,” she said. “With infrastructure, everybody is going to have to pay more eventually, we just don’t know when.”

Elaine S. Povich is a staff writer for Stateline.