Route Fifty asked local government officials what is most important to their communities’ future. Their answers may surprise you.

When forced to choose among competing priorities, local government officials said finance, economic development and infrastructure are most important to ensuring the future success of their cities or counties, according to a new Route Fifty survey. Social services, healthcare and other citizen-facing services were among the lowest priorities.

The survey, “Critical Priorities for Local Government: A Candid Survey of Local Government Officials and Agency Leaders,” took into account the responses of a mix of elected, appointed and career public officials at the local level. Respondents consisted primarily of senior-level officials.

Those local leaders ranked “Taxation, Finance, and Budget” as the highest priority for the future success of their jurisdictions, followed by “Economic Development” and “Infrastructure/Transportation.” Addressing “Public Safety/Crime” was also a key priority for future success, respondents indicated.

On the lowest rungs of the priority list appeared issues that disproportionately impacted citizens who are most in need of support. “Social services” ranked last among local officials priorities for the future success of their city, just below “Public Health/Healthcare” and “Environment/Resiliency.” “Diversity/Inclusion & Civic Engagement” was also generally seen as less of a priority by our respondents.

“Education/Job Training” was the highest ranked citizen-facing service, though the issue ranked as a low priority for the majority of survey respondents. 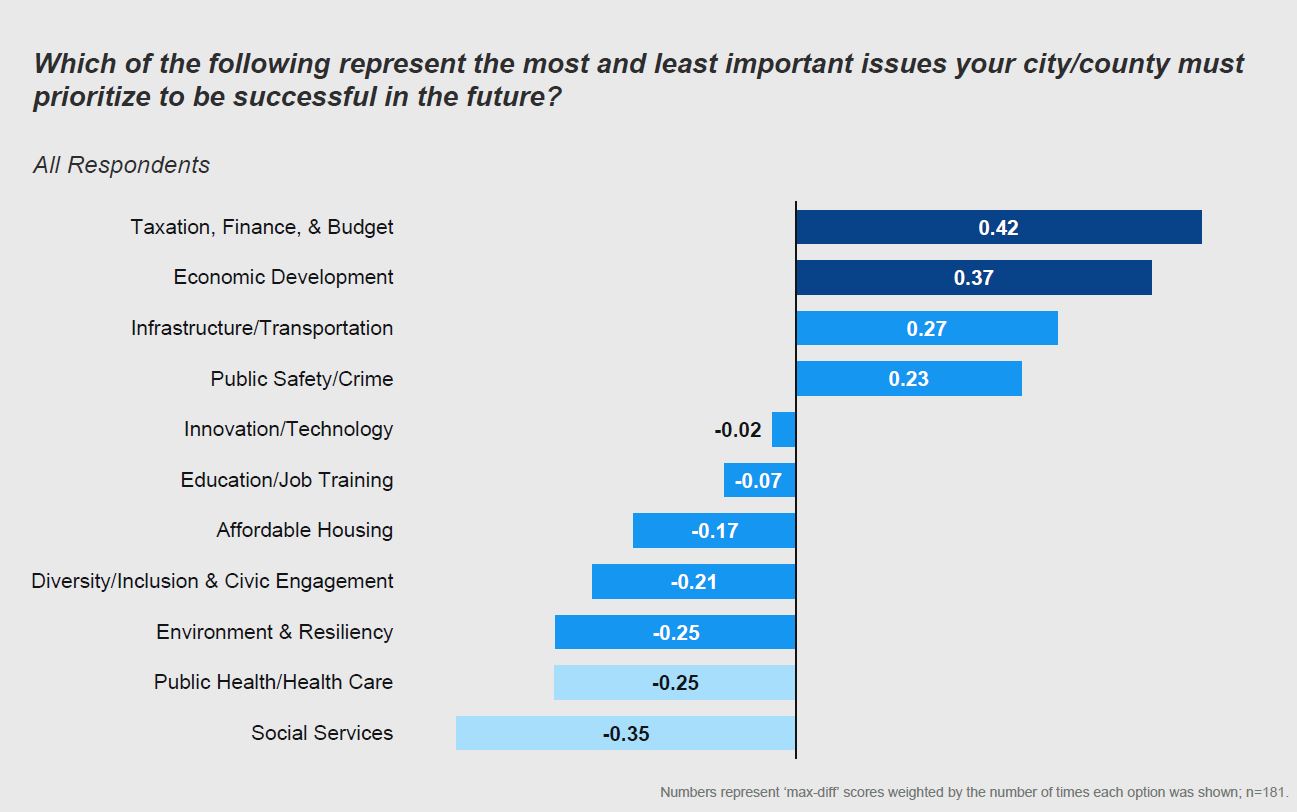 The type of jurisdiction that respondents served, as well as their career paths into public service, appeared to influence individuals’ priorities.

Career government officials, for instance, prioritized infrastructure and transportation more than their political counterparts did. They were also more likely to prioritize diversity, inclusion and citizen engagement than elected officials and political appointees.

Our survey found that the larger the city, the more likely a public servant would prioritize affordable housing. Those in cities and counties over 150,000 ranked affordable housing as a priority more often than not. Those serving larger jurisdictions were also considerably less concerned about city finances than their counterparts in smaller counties and cities. 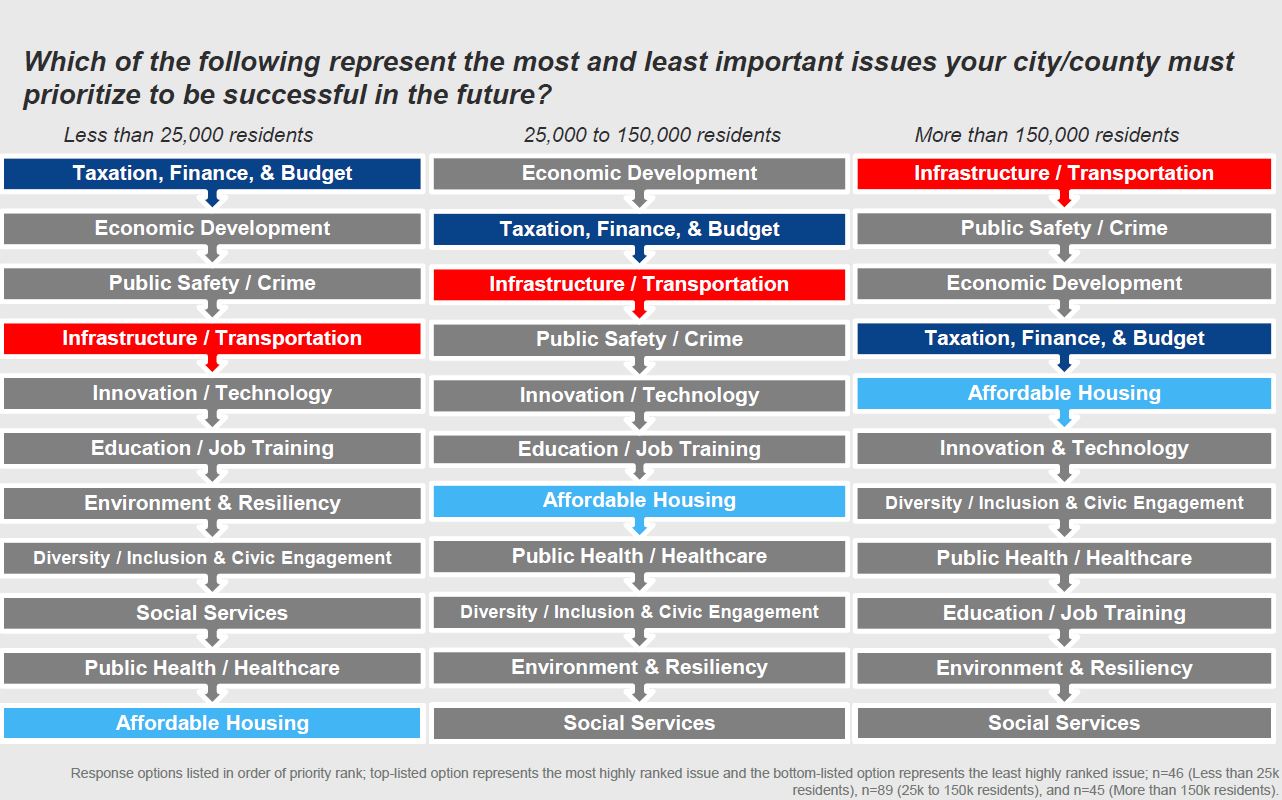 Across all demographics, one thing remained constant: “Innovation/Technology,” relatively hot buzzwords for officials, remained completely neutral from a priority perspective. The issue practically appeared to be a dividing line between high and low priority issues.

How We Gathered This Data

Covering state and local governments, Route Fifty recognizes that government leaders have no shortage of issues they need to address. Unfortunately, much of what city and county leaders want to accomplish runs into a lack of time, money or political will. In order to better understand the importance of one key issue versus another among local leaders, our research arm, Government Business Council, asked local officials to choose which key issues they felt were most important and least important to the future success of their jurisdiction.

As local government officials are often required to make difficult trade-offs in areas ranging from budgeting to the course of their daily jobs, we felt this was an excellent fit.

The U.S. Conference of Mayors helped Route Fifty with the survey, providing input, advice and helping shape the key priorities we asked our respondents about. The issues we asked the local officials to choose between were: Affordable Housing, Diversity/Inclusion and Civic Engagement, Economic Development, Education/Job Training, Environment and Resiliency, Infrastructure/Transportation, Innovation/Technology, Public Health/Health Care, Public Safety/Crime, Social Services, and Taxation, Finance, and Budget.

Mitch Herckis is Senior Editor and Director of Strategic Initiatives for Government Executive's Route Fifty. He is based in Washington, D.C.